You are here: Home1 / News & Events2 / News/Events3 / A matter of gas flow management – Microencapsulation of essential oils b... 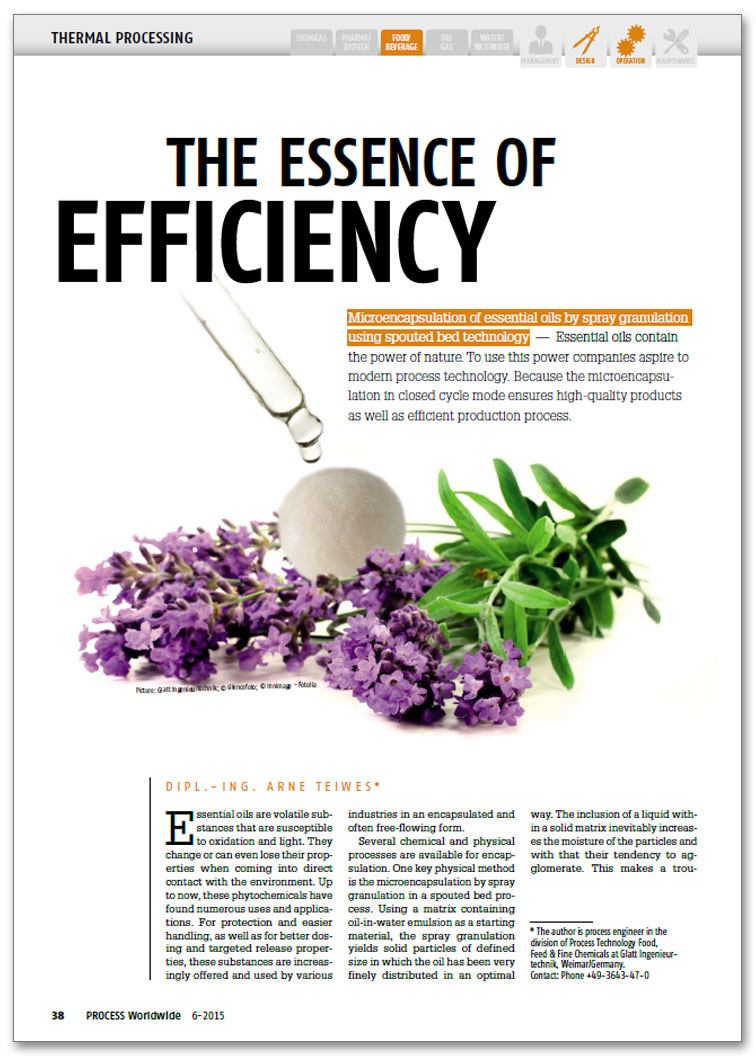 Essential oils are volatile substances that are susceptible to oxidation and light. They change or can even lose their properties when coming into direct contact with the environment. Up to now, these phytochemicals have found numerous uses and applications. In the field of food and feed technology and in the cosmetics industry, these odor-intensive and flavorful substances are used, amongst others, for improving the sensory or functional properties of products. Moreover, due to their various pharmacological effects, the pharmaceutical industry makes multifunctional use of the natural substances. For protection and easier handling, as well as for better dosing and targeted release properties, these substances are increasingly offered and used by various industries in an encapsulated and often free-flowing form.

Several chemical and physical processes are available for encapsulation. One key physical method is the microencapsulation by spray granulation in a spouted bed process. Using a matrix containing oil-in-water emulsion as a starting material, the spray granulation yields solid particles of defined size in which the oil has been very finely distributed in an optimal way (see figure 1). The inclusion of a liquid within a solid matrix inevitably increases the moisture of the particles and with that their tendency to agglomerate. This makes a trouble-free application of traditional fluidized bed processes difficult. These encapsulation problems can be avoided with the continuous spouted bed technology developed by Glatt Ingenieurtechnik GmbH. Furthermore, due to the thermodynamic equilibrium conditions present in a spray granulation process, a certain part of the oil to be encapsulated escapes from the granulation zone along with the fluidizing air. This has two drawbacks; firstly, a considerable part of the active substances is lost in the production process and secondly, the permissible legal limits for volatile organic substances in industrial exhaust gases will be exceeded.

Usually, oil-containing granules are produced in a commonly used single-pass system (see figure 2). For different volatile oils, the processing parameters with the highest impact were determined by sensitivity analysis for those systems. Adjustments of the formulation, rate of spraying and layer temperature resulted in optimal encapsulation conditions for this mode of operation and yielded a maximum possible oil recovery rate in the granules. Nevertheless, depending on the material system used, up to 20% of the active substances will still be lost in such a system.

Consequently, a higher oil recovery rate of the granules can only be achieved with a different processing gas flow management. Performing the encapsulation in a closed cycle mode (see figure 3) offers the possibility of reducing the decisive partial density ratio of particle to gas. The recirculation of the exhaust air allows selective adjustment of the oil concentration in the supply air. The resulting increase of the partial pressure of the oil in the supply air has an immediate effect on the transport of liquid in the granules during the encapsulation process. Thus, the reduced partial pressure gradient of the oil between the particle and the ambient gas leads to reduced oil loss in the granulation process.

Compared to a single-path process, the encapsulation process in closed cycle mode results in clearly less contaminated air that needs to be treated prior to being discharged into the environment. Since it is only the amounts of gas introduced in the cycle operation (e.g. atomizing gas, pneumatic filter cleaning) that have to be removed from the system and treated, the energy and material input for cleaning the exhaust air is significantly lower for the same granulation performance.

Operating a continuous microencapsulation process in closed cycle mode requires an additional processing step for the treatment of the exhaust air. Condensable components, for example water used as a solvent for the solid matter, have to be condensed and discharged from the cycle as otherwise the supply air would be saturated with solvents which prevents a proper drying process of the granules.

The redesign of the entire process allows the oil concentration in the supply air to the granulator to be varied. The closed gas cycle offers the opportunity of providing a better supply air quality with less humidity and a higher oil concentration. An encapsulation process operating with gas recirculation (cycle mode) allows up to 10% higher oil recovery rates to be achieved compared to the single-pass gas operation under comparable processing parameters. The loss of oil via processing air can be reduced by up to 99% with the use of a condenser located in the loop; and there is also a comparably low exhaust gas mass flow rate.

However, when using just a condenser, none of the two gas flow options will be able to ensure compliance with the legally required limiting values for volatile organic substances. A specific exhaust air cleaning unit that uses heterogeneous catalysis for the treatment of contaminated exhaust air from the encapsulation process makes it possible for the first time to arrive at a concentration that is up to 50% below the limiting value. This type of exhaust air cleaning unit operates at a temperature of 250 °C and needs no additional fuel for the treatment of the exhaust gas when compared to the conventionally applied thermal systems where the contaminating materials are combusted at temperatures of up to 900 °C. Since only the amounts of gas have to be removed from the system and treated that had previously been introduced, the energy and material input for cleaning the exhaust air is significantly lower at the same granulation performance. The exhaust air stream from the cycle operation is approximately 95% less than the air stream in single-pass mode.

From the energy point of view, the cycle operation offers a much more favorable way of integrating an exhaust air cleaning unit while complying with the legally required limiting values. Apart from using less energy, there is also less technical equipment needed for the heterogeneous-catalytic oxidation of volatile oils in a closed cycle operation (see figure 4).

show all published technical papers
Customized properties – drying and stabilization of microorganisms by...